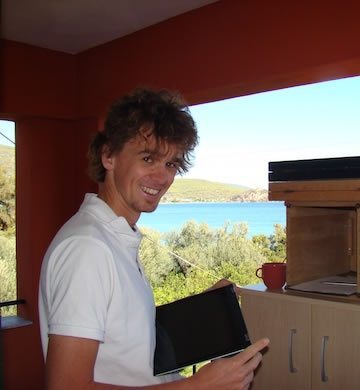 Frank, aged 29,  achieved degrees in Artificial Intelligence, Psychology and Cognitive Neuroscience, and is now completing his PhD-thesis in the field of Neuroscience. His main research interest boils down to the question „How can we explain complex human sensorimotor behavior in simple emergent, bottom-up processes?” As a member of Artisa’s advisory committee we like to interview him about his work and his relationship to science and art.

Frank explains: ‘I like almost all things I do. Moreover, I work efficiently, and I prioritize my activities. In this one year where I collected 180 credits instead of the standard 60 you wouldn’t find me at college. I’m much more productive when studying by myself.  In that period I had absolute confidence in myself, so no time was wasted with procrastination. Everything I touched kind of changed into gold… Above all, I wanted to get the best out of myself, something that turned out not to be an automatic given at the university. So I went after my own challenges in extra studies, courses, and commitees.‘

After graduating, he knew that he easily gets bored when he can’t explore new things and be creative. The brain is a challenging subject to study as it is one of the last frontiers in science as we still know so little about it. Frank criticizes much of the research done in neuroscience as being too anthropomorphic, assuming a brain „thinks“ like we humans think. In Franks view, ideally, research should be more bottom-up, letting the data define the categories.

Art and science can also be each other’s study topic. For example, a question such as this might exist for readers: where is creativity located in the brain? When confronted with this question, Frank responds skeptically: ‘Neuroscience isn’t ready to provide answers about creativity. Neuroscience can locate the brain networks responsible for lifting a finger, but not yet for creative processes.  These processes are very complex and involve many different connections. Actually, the problem already starts with the concept: creativity is such a higher-order, multi-level and ambiguous concept, that it is hard to define, let alone explicitly test in an experiment.’ In Frank’s opinion, cognitive neuroscience should stay away from such concepts until the lower order ’simple‘ concepts, like lifting a finger, have been given a place and have thereby informed us about the best way to ’speak the brain’s language’. And that is already difficult enough!

Lastly, there is something universities can learn from art. Science is, like art, a fundamentally creative enterprise. Creativity is promoted by a safe environment which supports self-development and exploration;  that stimulates things you like to do instead of must do…Creativity is killed by the contemporary climate of production and too many ‚must do’s‘ at universities. That is why it is so important that places like Artisa exist, where you can take distance, relax, reflect, and see the greater picture. Taking such distance brings back the joy into science, which is easy to forget in the current climate. Moreover, relaxation and joy foster creativity, as has been repeatedly shown in non-brain science.