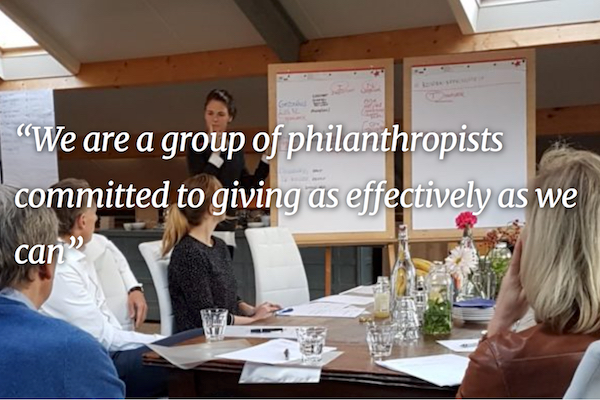 I met *Vera Schölmerich when she came to Artisa to finish her PhD dissertation. I got to know her as somebody who is very disciplined, in favour of getting things done and playful and compassionate at the same time. She appeared to be one of these rare creatures who finished her PhD in much less time than available. She is a dedicated scientist, who would like to maximize the findings from science for the better of this world. 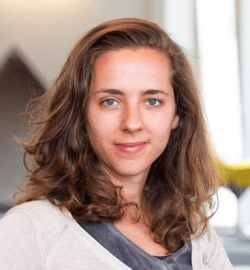 After a short career as an assistant professor she decided to move from the university world to an initiative, called Effective Giving. Effective giving is founded by philanthropists who are passionate about improving the world, but doing this well is challenging. Misinformation, lack of access to high quality data, and fallacies in our thinking often prevent us from maximising our contribution to a better world.

They founded Effective Giving because they believe this can change. Supported by experts, they develop, test and continue to improve decision-making frameworks for giving more effectively.

During her study and work as an PhD candidate Vera was occupied with 2 things. Evidence based policy and to research how poor people take decisions. Her expertise fits very well to the initiative of Effective Giving.

In evidence based policy Vera tries to bridge the gap between the findings of science and the programs policy makers are developing.

Vera : On the one hand you have practioners who are investing a lot of time in programs without researching the effect and on the other hand you have scientist who are doing all kind of evaluations of programs, which are not done in real life.

I like to think how you can bring these two closer together and how can you make use of results from science that is out there already.
We worked with an NGO to explain them what science discovered about what they are currently doing. And we made a database to see the effect of all the different interventions.
For example they were giving education to prevent HIV cases and science has shown that this doesn’t work. After this database they stopped doing those things.

How come that there is this gap between practice and science?

It is mostly sciences’ fault as academics publish very technical articles that are impossible to read if you are not a scientist and they are behind a paywall most of the time. At the same time for practioners it is hard to believe that what you do has no impact or even has a negative influence, if you invested a lot in a program.

How poor people take decisions. The lottery of life.

An example. We know that all humans tend to make cognitive biases. For example we all have the present bias. That means that you value the now much more than the future. You would now want to eat a chocolate bar even if you know that you gain weight from that in the future and regret it. But we think the future is kind of less valuable than the now. And we know that poor people or people who become poor all of a sudden have this bias much more.

And it is not because of genetics or intelligence. If you put anyone in a situation of being poor than you see similar results. Explanations are that poor people have higher stress levels and they have less feeling of control over their own life. These things make it difficult for them to make decisions that are good for their long-term health and economic situation.

I try to understand what is happening. Why this happens. We understand it globally but the nuances are not well understood. I try to create interventions that will help poor people to take better decisions.

One thing I haven’t done and I would love to do this is cash transfers. People are poor because they don’t have money. Let’s give them money. And see what happens. In countries like Kenia and Uganda this works really well. Instead of doing all these complicated interventions or thinking about what people want, just give them the money and they decide for themselves what they want. I would love to find a partner to research this better and get more insights.

On a personal note from the interviewer:  I have seen recently how falling into a bad economic situation by some friends can produce a lot of stress and lead eventually to a burnout and incapability to get their lives organised. It would be great if we would understand better how it works and which interventions will help.

Does this favour a basic income for everybody

There is some research but the outcomes are not very clear. It has never been done on a large scale and I would be in favour for trying.

Highly educated and wealthy people tend to attribute their success to themselves and not to luck and a lottery of life. They argue: I worked so hard and that’s why I reached this level. I go against this general attribution of success to their own hard work. We are extremely privileged. And it is quite easy to forget this. We are often hardly aware of these privileges. If I would have been born into poverty, then I would probably also still be poor.

There is a website called how rich am I. You can enter your salary and it will give you your own global ranking, how rich you are compared to the world and it corrects that you are in a certain country with currency etc. Even with an average income you belong to 3,2 % in the world of the richest population and most people don’t know that.
The lottery of just being born in Germany or the Netherlands, just that, even if you are poor in these countries, it is just amazing.

It is all about statistics

Vera: I taught statistics and a course on evidence based policy.

The idea is that people don’t understand statistics enough. The reason is that the way it is taught is very boring and technical and bland. In my own experience, I hated statistics as a student and only during my PhD I started to love statistics. When I was studying why all these babies die. Suddenly I needed these statistics. That is what I try with all the courses that I teach. To start off with some problems, for example global poverty and climate change and then to see how we can use statistics to better solve these problems. Then it becomes more interesting. I like the power statistics has to answer some questions.

Meditation and its benefits. How did you get into a practice?

What does meditation for yourself and for your work?

Vera: I can tell of how I started. I had no religious curiosity and no spiritual interest at all when I started. I lived in Thailand, I was 19 and I was trying to figure out what Buddhism was all about. I wanted to know the philosophy and how meditation works. Actually, the locals knew very little about it and they couldn’t teach me much. I went on a Vipassana retreat to learn more about it. It was like a boot camp, this 10-day retreat. The most hard-core of all the versions you can have with a cement bed and a wooden pillow. Getting up at 04.00am, sitting for 10 hours, we couldn’t move, couldn’t talk, no snacks, no sports, no dinner. Really crazy. Every day I thought screw this, I wanted to leave but I manage to finish it. I hated most of it but I loved some moments. That is where I discovered the power of the mind. To widen your perspective on your own life and on your own worries and problems. It can be a relief to realise that the things you worry about and you find extremely important that they are not important in a larger scale of things.

Training your mind let you perceive the things very differently and in very nice ways. Ever since then I have been meditating.
The impact it has on my scientific work is that my concentration improved.
Maybe if you sit more you have a bit more compassion for the people, also in my work and I’m bit nicer. But I don’t know if that is true.

What we can learn from art is this playfulness, which is at the heart of good science, in having discoveries, but is often forgotten in everyday life.
Creativity is trying to connect different things that are at first sight not connected.

Could you say something about your Artisa experience?

It is the best combination of working with a high concentration and getting a lot done and being extremely relaxed and in touch with nature and good food. This combination I have never anywhere else. I definitely don’t have it at home and I don’t have it at vacation even if I work sometimes on vacation, with a feeling of guilt. To me it is really unique.

It is very hard for me and I guess also other people to create that in their own lives.  Sending students to Artisa has much more impact than all the conferences that are funded. If I stay at home 1 month I do less than being 2 weeks at Artisa and taking a holiday of 2 weeks after.

*Vera Schölmerich studied Development Economics at Cambridge University, and completed her PhD in reproductive health at Erasmus University. She worked as an Assistant Professor in Global Health and lecturer in statistics at Erasmus University before joining Effective Giving. She is a member of Artisa’s advisory board.