The refugee crises in Europe. Looking away is not an option.

A week in January. A week in which we will work for the Dutch organization Because we Carry (BWC). Supporting the refugees on Lesvos who have to stay there for a long time under terrible, inhumane conditions. We felt that it was a cooking pot, but it remained relatively quiet. In recent days (3 and 4 February) there have been demonstrations, both from refugees and from the residents of Lesbos. The cry for help is slowly being covered in the media. What is urgently needed is action and a sustainable approach. In this blog a report of our stay at Kara Tepe and Moria.

The situation at Kara Tepe and Moria

Orderly, clean, safe: those are the first impressions upon entering the Kara Tepe refugee camp on Lesvos. Kara Tepe is run by the municipality and is designed for vulnerable people and families with small children. 1220 people live here, mainly from Afghanistan, Syria, Iraq, Iran and Palestine. Because there are so many vulnerable people on Lesvos, it is like winning the lottery when you end up here.

Every family lives in an isobox with air conditioning. So they have a place to retreat. You don’t see tents here. There is a medical post, a school for the little ones. A number of NGO’s work together to create a community feeling and give people a sense of dignity. The reception is 24-hour staffed by Greek officials, who do this with respect for the residents. The food is distributed so people do not need to cue. Small ovens have been built and people can bake on a wood fire. Weather permitting, a family makes pita bread for a baker in Mytilini. On arrival at Kara Tepe, BWC ensures that people are welcomed. Besides giving them plates, cutlery, a thermos and soap, we give attention and show interest. They are surprised, didn’t have that for a long time. It is heart-warming to see how grateful people are that they have been given a place in Kara Tepe.
Yet this camp also has its flaws. For large families up to 12 people, an isobox is very tight. When you are lucky there is electricity for a few hours a day. Too often it is very cold inside and in Summer it must be soaring hot. The toilets are constantly flooded due to leaking sinks and the showers are cold. No fun to shower when it feels like – 1 degrees. We regularly see mice and rats walking between the houses.

Compared to Moria, however, it is a decent place to live temporarily. Moria is set up by the state and run by the army. Everyone who arrives at Lesvos has to go to Moria to get registered and wait for their asylum procedure here. When the borders were still open, most stayed for a few days. Since 2016 the borders are closed and people have to “survive” for many months, sometimes more than a year in Moria. They call it ‘living in hell!’. Since January 2019, the influx of refugees on Lesbos has increased enormously. While there is only place for 3,000 people, the number rose to 10,000 in August 2019. Then the camp was bursting at the seams and the Greek state and NGOs didn’t know how to provide this crowd with first needs, let alone medical and psychological help. Now in January 2020 the numbers have exploded and there are around 21,000 people trying to survive in Moria. (Read the article in the Guardian of January 16, or the cry for help from doctors without borders.)

Next to the official rescue building in Moria, a former prison, is an idyllic olive grove that has turned into a degrading, crowded and very dirty place. Everything is lacking. There is a tent on every inch, some with pallets underneath and made of sturdy plastic, others are shaky domes, leaking during the first rain and collapsing under stormy winds. If you live at the bottom of the hill, your tent will be filled with rainwater or an overflowed sewer system. Waste and vermin everywhere. There are hardly any sanitary facilities. It is unsafe, especially in the dark. Women don’t dare go to the toilet at night. There are long queues in food distribution. No school for the children here.

We are very touched by the circumstances in which people, fleeing war and violence, have to live. Astonishing that we hear only marginally on the current news media about the numbers and the impossible, appalling situation. 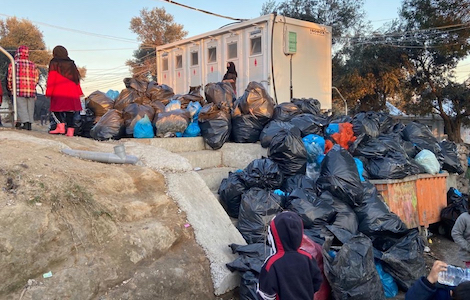 One afternoon we participate in a clean-up campaign, with our hands in the dirt. Some people come to thank us and apologize for the dirt. If they had resources, they would clean it up themselves. We had expected much more anger and outrage. An anger that we feel ourselves. How can we make this happen? All non-arguments of fortune seekers disappear if you really look at what is going on here. We see people who are injured, many children (40% are children) and many women. In the so-called safe zone for single women and minors traveling alone, we see a boy less than 10 years old, alone on the run. On the pathway an old man stumbling on crutches, a plastic bag to protect his foot. Imagine that you have to spend the last years of your life like this. Fleeing from war and violence and then ending up here where you are a faceless number, someone who is not allowed to be there, and receiving an unworthy treatment. NGO’ s sound the alarm bell. Something has to change here and very soon. A lot of damage is already done to traumatized people.

On Kara tepe the refugees are called residents and there are many residents who do volunteer work. There is the breakfast team of residents, the barbershop, the beauty salon, the sports club, the tsai (tea) shop and the bike shop.
We from Because we carry strengthen all these teams. At half past seven our day starts with making and distributing the breakfast. We fill the bags and carts with a stirring music and then we go into the different neighbourhoods to hand out breakfast. Each of us is assigned to one specific area. That way you get to know the people a bit. The older woman who waits for us every morning with a high five, a hand on her heart and then kisses, the gentleman still overcome with sleep, and looks like he doesn’t want to wake up, the woman always a smile on her face, when she sees us, the man who’s in for a joke, while he makes a stew for his family and the little girl who takes care that the breakfast and nuts are brought in.
With the resident volunteers we drink coffee and tea before and after the breakfast is served. Their resilience, discipline and sometimes cheerfulness touches me. They are there every day and always with good cheer. Every week they have to say goodbye to European volunteers and welcome a new team. The latest dances are shown to the music and the men proudly show their hairstyles after a visit to the barbershop. Photos of family are also shared. 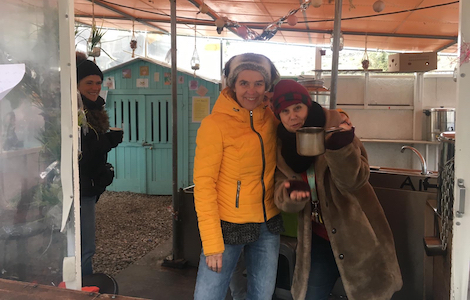 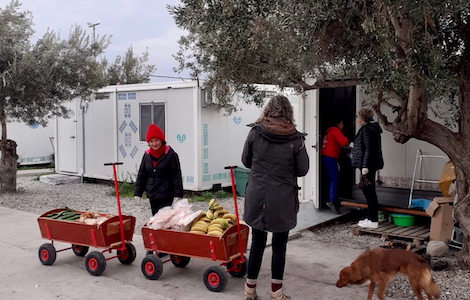 Because we Carry consciously brings positive energy. During the first briefing it is explained that we are not supposed to have deep psychological conversations. This is to prevent any trauma to arise. We will be gone in a week.

After the breakfast round we are divided among the other teams, such as the bicycle shop, the tsaishop, the barbershop, beauty salon or there are one-off jobs such as organizing the warehouse, making fabric packages for the women or welcoming new people.
These activities bring a village and community feeling. There is togetherness and human dignity.

Recently, NGOs such as BWC are also allowed to set up activities on Moria. The two women, Claudia and Lisette from BWC do fantastic work. I would not know where to begin in this misery. They started with small steps that create a positive impact. Once a week Lisette goes running with the women. With a ghetto blaster and swinging music, she invites them to join the jogging and it works. Sometimes with fresh reluctance but in the end always radiant and happy with this self-victory.
One afternoon a week Lisette organizes a beauty salon for the women who are single and in the “safe” department. They receive a small hand or neck massage, a face mask or their nails are varnished.
After we have given the first woman a hand and neck massage, soon there is a queue of people waiting. Their hands often cold, their shoulders tight, some relaxation and warmth slowly comes. Without words there is a sense of belonging. Sadness also rises, the woman who has lost her mother in war, or the young woman from Somalia traveling alone and feeling very lonely. She left her family in Somalia and now in this misery she wonders if it was worth the flight. The session ends in a real dance party where everyone dances with each other to sounds ranging from the Middle East, Persia to Africa and western pop songs.
This resilience, being able to have fun despite these barbaric circumstances affects me. I know this week is just the beginning. And that I want to make an effort to change this.
The refugee crisis has had many faces of flesh and blood, so looking away is no longer an option.

Due to the EU-Turkey deal and the Dublin procedure, we no longer see and hear so much about this humanitarian disaster. It is kept “far” from us. Initially, the refugee influx dropped and it seemed to work. However, that is no longer the case. With more than 41,000 refugees on Greek islands, the very slow asylum procedure in Greece, and the horrible situation in the camps, people are trapped like rats.
It is dramatic for all involved. Last week there was a general strike on Lesvos. The population of Lesvos has done a lot for the refugees, they thought it was temporary. Now they suffer from it and their resilence is gone. It certainly doesn’t work for the refugees. They have been stuck on the island for too long in the worst conditions. It is European politics that abandon these people. It is in the interest of everyone, including the European Union, to come to a solution together and to restore the dignity of refugees, providing all the care we can give.